Charts of the Month: Perspective on the Large Cap Rotation

Small cap stocks enjoyed a brief leadership position over large caps as the U.S. emerged from the recession, but the rotation has been short lived. Large caps have come into favor again, resuming a run of dominance that was in place before the pandemic.

A couple of charts below show how unusual the run by large caps has been, and what that means for relative valuations. The first chart displays performance of large caps (as demonstrated by the S&P 500) relative to small caps (the S&P Small Cap 600).

Small caps usually tend to lead during an economic recovery, and that’s what happened in the fall of 2020 through the early spring of this year. But the trade reversed sharply beginning in April, and large caps returned to favor. 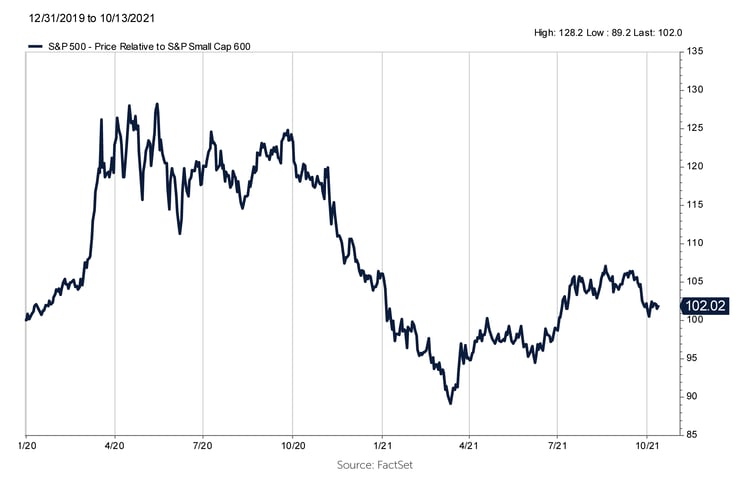 The market’s preference for large caps at this stage seems unusual to us. In other economic recoveries, small caps tended to outperform large caps for a longer period. The second chart puts this in perspective, showing small caps’ outperformance coming out of the financial crisis. If the economy is still recovering, one might expect the run by small caps to be longer, especially considering the extraordinary outperformance large caps had already experienced before the pandemic. 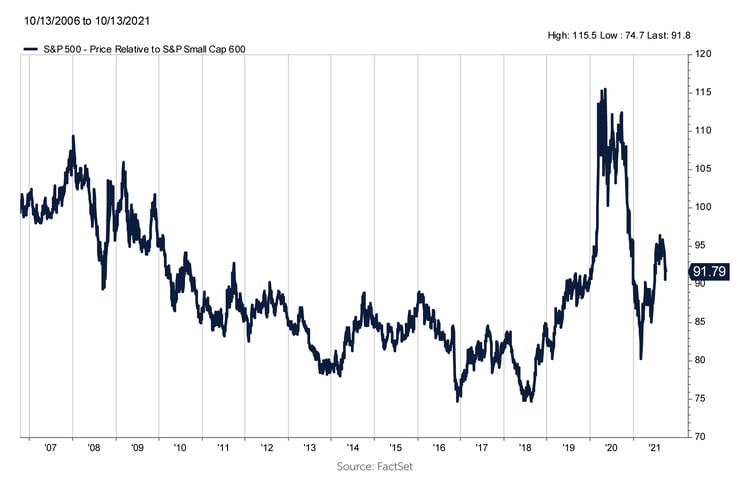 Where does this leave small caps?

At Prospector, we do not attempt to make directional calls on when things may turn around … we only point out the unusual dichotomy between large and small caps at present. This is best shown through the valuation chart below, which compares the P/E ratio of the S&P Small Cap 600 relative to the S&P 500. In short, the chart shows that only very rarely have small caps ever been this attractive relative to large caps. 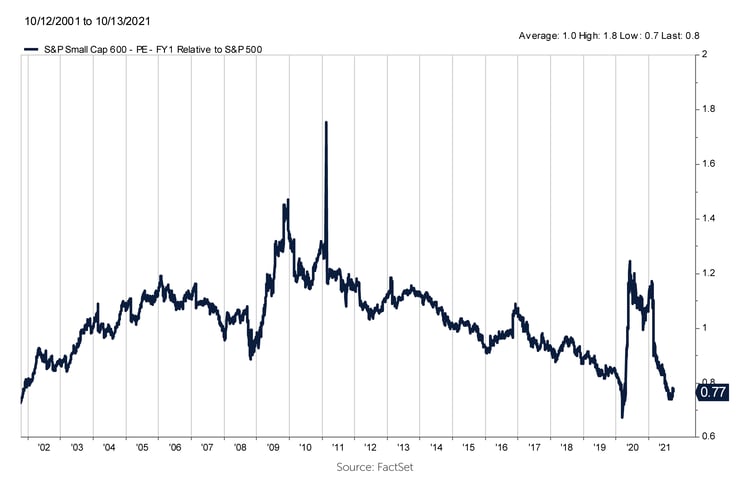 This has implications for our investment process. As we have written in prior blogs, one of our key determinants of value is stocks trading below their private market value (and that could be acquisition targets). Given that focus, we tend to be less attracted to mega-caps, and often find value in small- and mid-cap companies. Relative valuations between large and small caps suggest that area of the market is still providing opportunity.

The views described herein do not constitute investment advice, are not a guarantee of future performance, and are not intended as an offer or solicitation with respect to the purchase or sale of any security. Investing involves risk, including loss of principal. Investors should consider the investment objective, risks, charges and expenses of a Fund carefully before investing. Please review the offering memorandum or prospectus of a Fund for a complete discussion of the Fund’s risks which include, but are not limited to: possible loss of principal amount invested; stock market risk; value risk; interest rate risk; income risk; credit risk; foreign securities risk; currency risk and derivatives risk.

Nothing contained herein constitutes investment, legal, tax, or other advice nor should be relied upon in making an investment or other decision. Any projections, outlooks or estimates contained herein are forward looking statements based upon specific assumptions and should not be construed as indicative of any actual events that have occurred or may occur.