The Potential for a Return of Inflation

“Economic medicine that was previously meted out by the cupful has recently been dispensed by the barrel. These once-unthinkable dosages will almost certainly bring on unwelcome aftereffects. Their precise nature is anyone’s guess, though one likely consequence is an onslaught of inflation.” – Berkshire Hathaway’s 2008 Annual Letter

Mr. Buffett’s prediction for an “onslaught of inflation” has been a false narrative. Over a decade later, economic medicine that was once dispensed by the barrelful is now dispensed by the truckload. Since the crisis, balance sheets of major central banks have more than doubled, negative-yielding debt is now a reality to the tune of $11 trillion, and the global monetary policy rate index remains unchanged.

When Mr. Buffett made his statement, central bank assets were a mere $9 trillion: 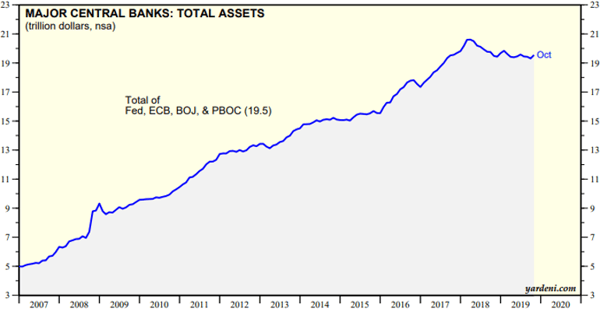 Despite a surge in stimulative measures, below-target inflation remains an issue. This is understandable given demographic trends of an aging population and low population growth, a slowing global economy, a weak manufacturing sector, Brexit uncertainty, and the trade war. Even the once hawkish Fed is concerned that the United States could be at risk of entering a period of sinking inflation, zero rates, anemic growth, and the exhaustion of accommodative monetary policy (similar to what Japan and Europe have experienced). If a progressive candidate is elected in the 2020 Presidential Election, these fears should be exacerbated as Republican tax cuts may be rolled back along with pressure on corporate profits and economic activity.

However, the United States is somewhat better positioned than peers to combat deflation going forward. We have monetary “ammunition” in the form of additional rate cuts and quantitative easing measures, while the Eurozone and Japan have few policy tools remaining. Additionally, the United States faces demographic headwinds in the form of an aging and shrinking work force as a percentage of the population – but these headwinds are less versus what Japan, South Korea, China, and parts of Europe are facing. Plus, we have relatively higher positive population growth aided by both a higher birth rate and a better immigration rate. Finally, the United States remains the premier market for business activity given robust and enforced business laws, accessible and diverse capital markets solutions, pro-business policies, and high workforce productivity.

Given that policy makers are focused on fighting deflationary pressures, the outlook for a significant acceleration in inflation seems remote. However, there are multiple reasons why inflation could accelerate over time. In an effort to spur the economy, policy makers have embarked on an unprecedented campaign of quantitative easing, a tool which is inflationary in nature.  Additionally, stimulative economic policy has pushed global debt to $255 trillion, which has roughly doubled since 2004. All else equal, high debt levels lead to high inflation. Another argument is governments will accelerate inflation to lower the present value of debt to facilitate de-leveraging. Finally, continued progress in trade negotiations, full employment, and a rebound in global growth may accelerate the pace of inflation.

If this strikes a chord with you, please join the PMs of Prospector, John Gillespie, Kevin O’Brien (CFA), and Jason Kish (CPA, CFA) for a live conference call where we will be discussing the risks associated with a potential return of inflation as well as the rise in corporate debt and other aspects of today’s economy and financial markets.

To register for this conference call on Tuesday, February 25 @ 2pm ET, please click on the image below. 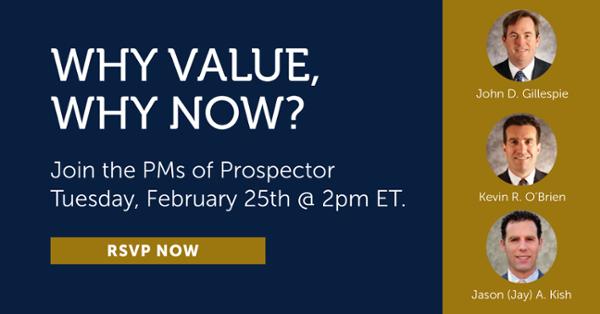