Reflections on Value’s Outperformance and Our Outlook Going Forward

After the new $1.9 trillion stimulus package was passed along party lines early in the year, the multi-trillions of dollars of government stimulus and additional trillions of monetary support by the Fed left the United States awash in cash. As can be seen in the chart below, the U.S. money supply has skyrocketed, and stimulus checks have left the U.S. consumer with a considerable amount of cash in their pocketbooks. The result of all of this undoubtedly aided the rise in risk assets during the first few months of 2021 and led to some speculative market actions that, to us, are reminiscent of the late-1990’s dotcom bubble: loss-making companies were the top gainers, Reddit message board posts led to hundreds of percent gains in some stocks, and billions of dollars flowed to hundreds of SPAC (special purpose acquisition corp.) deals, digital currencies and non-fungible tokens (NFTs). A future blog will go into much greater detail on each one of these risk assets. 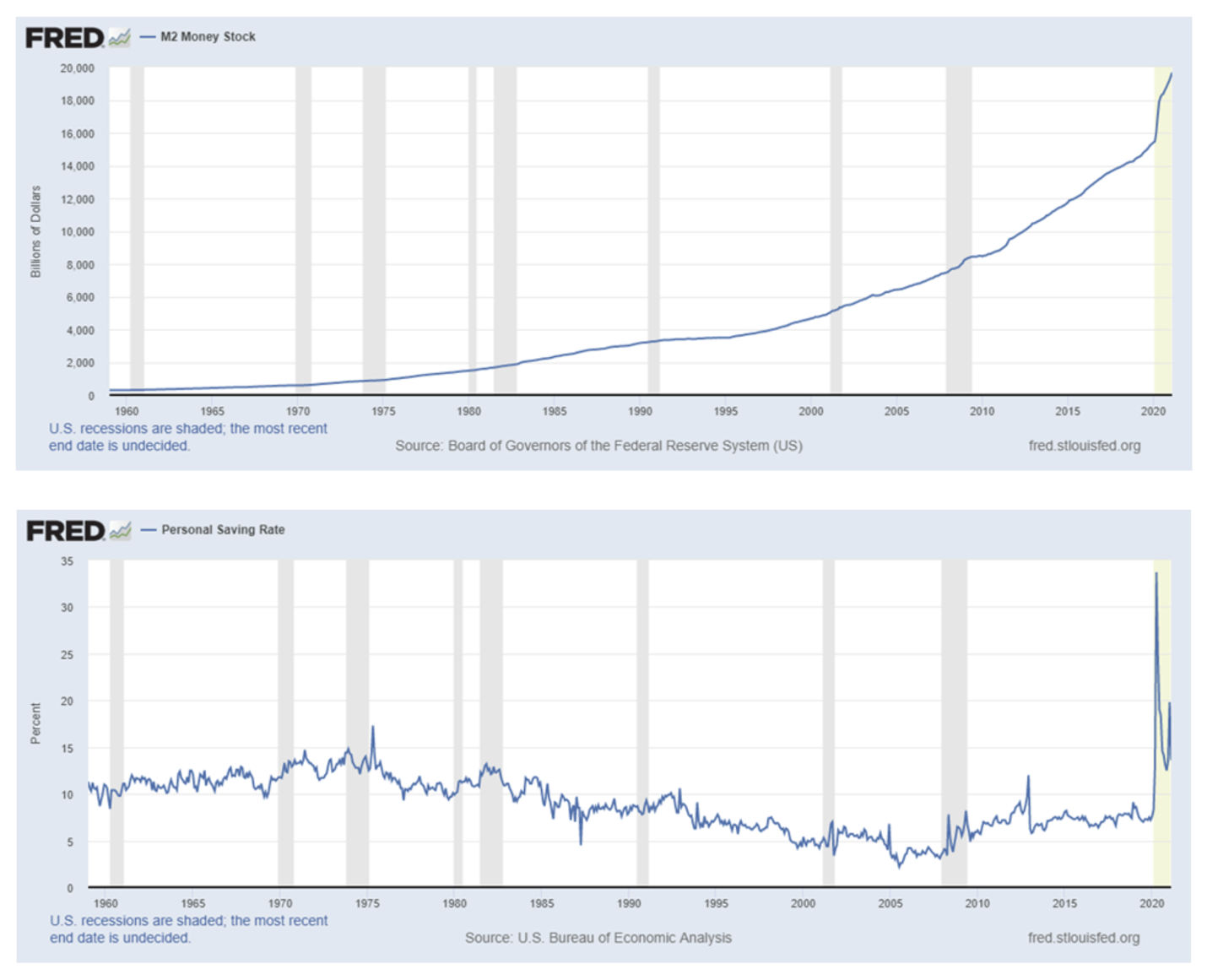 As we entered March, the steam started to come out of some of these speculative assets. For example, taking a look at a broad index, loss-making companies in the Russell 3000 were down on average 3% in March in contrast to an average 5% gain for companies which posted profits over the trailing 12 months.

Additionally, most of the stocks which were targeted on Reddit message boards have traded back down closer to where they were trading prior to the short squeezes (save for a handful of the more popular ones, including GME, which continue to trade much higher than before the frenzy, although significantly below their peak prices). Additionally, SPACs aren’t being met with nearly the same fanfare as they did earlier in the year, and the foreboding supply portends a questionable future for the over 400 still looking for a partner.

Meanwhile, starting mid-February, we saw a significant rotation from growth to value stocks, with the S&P 500 Value Index rising 10.8% during the quarter, while the Growth counterpart was up only 2.1%. This value outperformance was possibly a result of the 10-year Treasury‘s persistent rise and increased expectations for future inflation. As we’ve discussed in prior blogs and white papers, it’s harder to justify ever-increasing valuations for fast-growing companies in an increasing interest rate environment.

Will this rotation persist and be anywhere near the magnitude of what we’ve seen over the past 10 years+ of growth outperformance? Only time will tell, but boring as it may be in comparison to investing in tweets, we will continue with our process of searching for long-term investments in undervalued companies and will leave the investing in NFTs and the like to others.

2021 looks to be a transitional year. We are clearly in the early stages of a new economic cycle, following the coronavirus-induced recession of 2020. Continued progress on vaccinations will allow the U.S. economy to return to more familiar footing with the resumption of dining out, air travel for business and pleasure, and large group gatherings. The recent United States elections, although closely contested, have ushered in a change in administration with attendant changes in the agenda around stimulus, spending, taxes, and trade. The razor-thin margins in Congress are likely to temper any radical policy shifts. Importantly the volatility emanating from the executive branch should ease.

While interest and mortgage rates have lifted, they are coming off historically low levels, while inflation remains below target. We see early signs of reinflation in Treasury and TIPS yields from the historically high levels of government spending here and around the world. We are carefully monitoring aggregate corporate debt levels (especially BBB- debt which is a single notch above junk status), currently above pre-2008 crisis levels and loom as a potential problem absent continued aggressive Fed support. Unemployment has shown significant improvement but continues to be an issue.

In our estimation, overall equity valuations remain at elevated levels, due to the sharp rebound in equities, which has outpaced prospective positive earnings revisions. The high valuations of a small number of enormous technology companies certainly exert upward pressure to the overall averages. Recovery in aggregate earnings will take time as certain industries such as hospitality, entertainment, and travel are tied to the success of a vaccine rollout plan and will take longer to return to pre-coronavirus levels. Treasury and high-grade corporate bond yields look unattractive after the dramatic flight to safety rally during 2020. In any case, we believe value investing is ripe for a continued period of outperformance. Meanwhile, we still believe equities represent a superior asset allocation alternative to bonds over the longer term.