As you’ve surely seen, the equity markets have been under severe pressure. The S&P 500 Index, which was up roughly 4% for the year through mid-February, is now down 20.3% as of 10am EST on March 13, 2020. In comparison, small caps and energy-related stocks are faring much worse, as illustrated by the charts below. 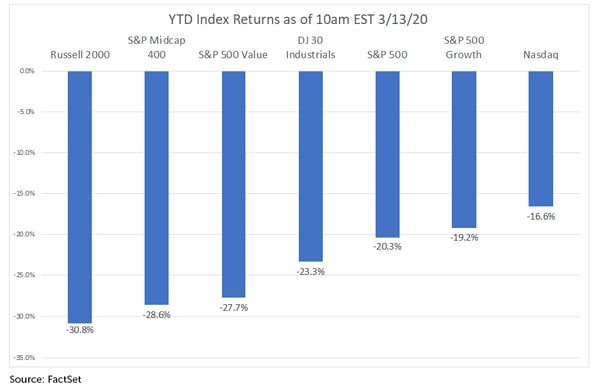 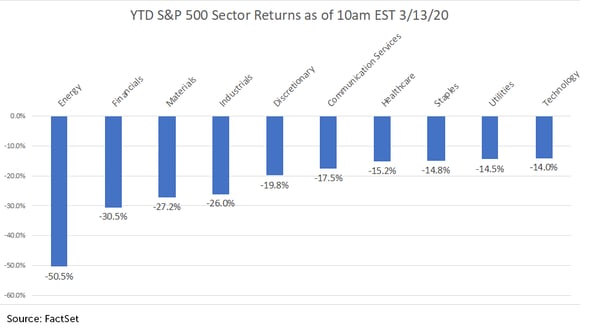 During a recent conference call between Prospector Partners and financial advisors, the question was asked:

Portfolio Manager Kevin O’Brien offered his explanation. “First, if you think about the types of companies we own, they’re generating a lot of free cash flow. They tend to have excess capital, whether it be on the balance sheet, or the ability to borrow if needed because they don’t have a lot of debt on the balance sheet.

In many cases, these companies may accelerate the pace of their buybacks during a downturn which could provide a considerable amount of downside support.

If you think about the sectors that we typically invest in, they tend to be the more defensive sectors like consumer staples, healthcare and the less-cyclical portion of financial services companies. And those names tend to be safe havens during times of economic weakness. So that’s one of the biggest reasons why we’ve done well in downturns.”

Mr. O’Brien also elaborated on what the Prospector team does differently, including their first-and-foremost emphasis on assessing downside risk.

“What do we do that our competitors are not doing? Well, from our experience, most people look at the upside first.  We don’t. Instead, we look at the downside first.

What does that mean? We don’t like to buy companies where ex-ante we could see them losing more than 25%. As a result, we tend to be overweight certain sectors; the portfolios typically own less-cyclical sectors with way more predictable cash flows, and we tend to be underweight cyclical sectors like technology, industrials and consumer discretionary companies.

One sector where we are overweight is financial services, but within this sector, we’re typically owning the most conservative companies. Many of these holdings are in the Property and Casualty (P&C) insurance industry, but there are many different segments and sub-segments within financial services that we will own. When most people think of financials, they think of large banks that are highly levered and that’s not what we do.

In other sectors, we love owning great brands with super-wide moats and very predictable, stable cash flows no matter what the economic environment is like. So, we stress test our companies, look at what kinds of cash flows they’ve produced during very difficult economic times, and we will reject companies that have been under pressure in more difficult periods.

The other thing that we do is look at balance sheets first. We consider ourselves debt-allergic.

We do not like companies that we think are going to go out and do a big acquisition and lever-up the balance sheet.  This is one of the first questions we ask company management teams we meet with, which we do over 300 times a year.

In many cases, we’re looking for companies with very stable core bases. We want a cash cow that is able to innovate around its product set and stimulate just a little bit of growth and hopefully it’s better than the category average.”

If you would like to be notified when we release new insights, please let us know!
Just complete the form on this page and we will deliver them to your inbox once per week.