A Wild Second Quarter & Outlook for Remainder of 2020

The COVID-19 global pandemic continued to have massive implications during the second quarter, as cases continued to rapidly rise in the United States. The unemployment rate reached 14.7% in April, and U.S. GDP is estimated to have contracted by over 30% in the quarter after falling 5% in the first three months of the year. On top of this, the spring and early summer saw dramatic civil unrest domestically as well as areas of Europe. U.S. relations with China worsened, polls increasingly pointed to a potential Democratic sweep of the Presidency and both houses of congress in the upcoming November election, which could portend higher taxes, increased regulation, and an overall less favorable climate for business. Against this foreboding backdrop, the S&P 500 had its best quarter since 4Q98 - returning over 20% in the period and ending June only 9% from its all-time high.

This incongruity is most likely the result of massive global stimulus, which injected a never before seen amount of liquidity into the market. The phrase “don’t fight the Fed” has never been more apt. Indeed, Bank of America has estimated the global fiscal and monetary response to the pandemic-induced slowdown at $18 trillion…and we’re not done yet. With so much excess liquidity in the system, any positive news about a potential vaccine or treatment for COVID-19, or potential for reopening the economy was met with great fanfare by the market. This despite an increasing number of COVID-19 hotspots emerging across the country as states began to reopen, giving rise to questions regarding whether the country will have to go back into lockdown as northerners head back indoors in the fall and winter. Bad news has been largely ignored, and good news cheered - one had the sense that a fear of missing out (FOMO) was driving investor behavior more than underlying fundamentals during the period.

Nowhere was this FOMO more apparent than in technology stocks, which, having led the market for much of the past decade, continued to outpace. “FAANG” companies Facebook, Apple, Amazon, Netflix, and Google’s parent, Alphabet, returned 36%, 44%, 42%, 21%, and 22% in the second quarter respectively. Investors rationalized ever-increasing valuation multiples, viewing these companies and their tech cohorts as relative winners from a “stay at home” economy. Indeed, the sector (plus Amazon) contributed roughly half of the S&P 500’s return during the period. While many of these companies are beneficiaries from the work from home trend, increased internet use, move to the cloud, etc., many of these stocks are reaching near-mania valuation levels reminiscent of the “dot com” bubble of the late-90’s. This also continues the trend of the market placing ever-increasing premiums on companies that exhibit appreciable amounts of growth.

Observe the following chart illustrating the year-to-date outperformance of growth and momentum stocks, which ended the period well into positive territory. 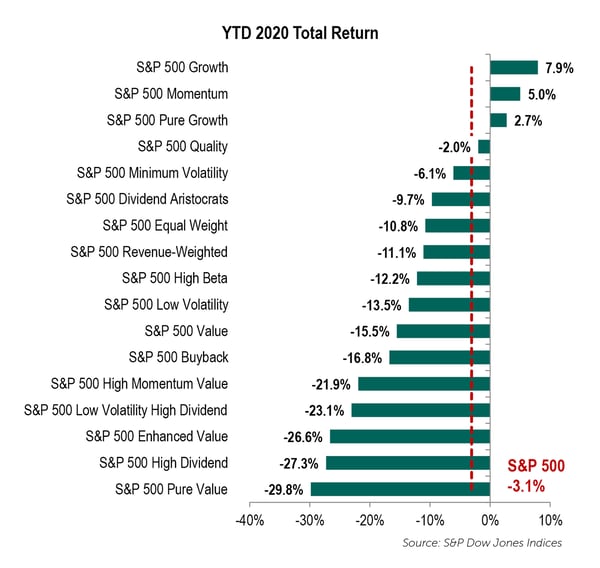 The range of outcomes in the short to intermediate term is wide and hinges on the imminent outcome of the “bending the curve” effort to curtail the COVID-19 pandemic. Economic contraction, trade and geopolitical concerns weigh heavily. The upcoming United States presidential election is right around the corner and a shift in power could prolong market volatility.

Interest and mortgage rates continue near historically low levels, inflation is non-existent, and a recession is here. We are carefully monitoring aggregate corporate debt levels (especially BBB- debt which is a single notch above junk status), which now sit above pre-2008 crisis levels and loom as a problem without aggressive Fed buying through the latest quantitative easing program. Unemployment has also spiked to double digit levels and has not yet stabilized.

In our estimation, equity valuations remain at elevated levels, due to the sharp decline in expected earnings for the rest of 2020 and into 2021, and the sharp rebound in equities. Recovery in aggregate earnings will be slow as certain industries such as hospitality, entertainment, banking, and travel will take much longer to return to pre-coronavirus levels. Treasury and high-grade corporate bond yields look unattractive after the dramatic flight to safety rally during the current health crisis. We believe equities are a superior asset allocation alternative to bonds over the longer term.