A Discussion of the U.S. Debt Situation: Corporate Debt

“Debt, we've learned, is the match that lights the fire of every crisis. Every crisis has its own set of villains - pick your favorite: bankers, regulators, central bankers, politicians, overzealous consumers, credit rating agencies - but all require one similar ingredient to create a true crisis: too much leverage.” - Andrew Ross Sorkin

“Only when the tide goes out do you discover who has been swimming naked.” - Warren E. Buffett

Given the focus of the Prospector’s strategies, our blogs tend to be more about equities, but occasionally we will be touching on the world of fixed income. After all, the size of bond markets, both in the U.S. and abroad, is much larger than equity markets. Further, both asset classes are heavily intertwined, since a company’s equity offerings will affect bond holders, and vice versa, while virtually every company is affected by government debt and interest rates. This week, we will focus on the state of corporate leverage, and in future blogs we will be exploring consumer debt, government debt, the repo market and more.

An accommodative monetary policy does not come without costs. The most obvious being the dependency on cheap and abundant debt. Non-financial corporate debt as a percentage of GDP is higher today than before the financial crisis. While the credit environment is strong and we aren’t forecasting impending doom, current debt levels instill caution. This is especially the case given the outlook for slower economic growth coupled with the ongoing trade war and political uncertainty. We are also concerned with the higher formation of distressed debt in recent months. Today, the ratio of high yield debt trading at distressed levels has risen to nearly 10%, a sharp jump from 6% in July.

Ironically, our greatest area of concern is lower-rated investment-grade credits (i.e. BBB-rated debt). Today, the U.S. BBB bond market exceeds $3.1 trillion and accounts for fully 53% of all investment grade bonds ($7 trillion of BBB-rated debt is outstanding on a global basis). In context, there is over 5x more domestic BBB debt today versus pre-crisis levels, while non-investment grade debt has “only” doubled. Those bonds closest to the precipice of non-investment grade status, the BBB-minus issuers, comprise 27% of the BBB category, up from 23% in 2007, a dollar increase of 7x. The growth in this most vulnerable BBB-minus sector is headlined by energy, healthcare, and industrial borrowers. 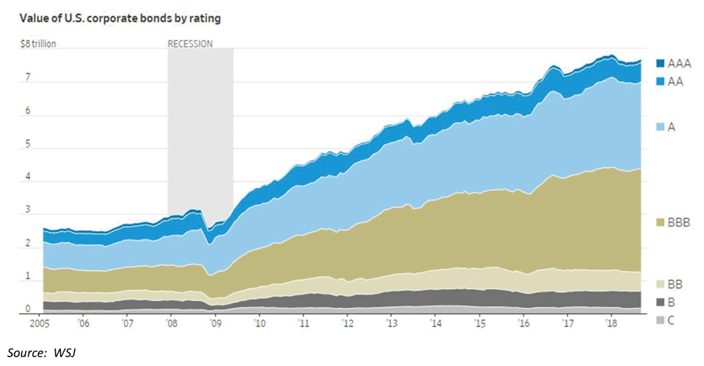 Interestingly, the number of BBB issuers is relatively unchanged for over a decade, indicative of the BBB cohort taking on additional leverage. That said, part of the growth is explained by the change in the composition of BBB issuers. Post financial crisis, multiple financial institutions with massive balance sheets were downgraded to BBB, although to be fair, most of these are BBB plus, three full notches above high yield. Citigroup alone explains 14% of total BBB debt growth since 2010. While some financial institutions “belong” in the BBB category, we would argue traditional banks such as Citigroup do not, as they now have enhanced regulatory oversight, better liquidity profiles, and carry significant excess capital.

What does a recession look like for the BBB issuers? Post the 2001 recession, 15% of BBB issuers realized downgrades to high-yield status in the following three years. In 2008, that figure was 11%. However, in both recessions, over 40% of issuers were labeled as having the potential of being downgraded to high yield. The next recession could be more material for BBB issuers given the staggering growth of debt versus prior cycles, and the higher weighting of BBB-minus within the cohort. If these BBB-minus bonds are downgraded just one notch, the issuers will be considered “high yield.” This will result in materially higher borrowing costs, increased investor scrutiny, reduced access to the credit markets, and (all else being equal) lower net earnings.

This article in an excerpt taken from our Q3 2019 Commentary.
If you are interested in reading the commentary in full, please click below. 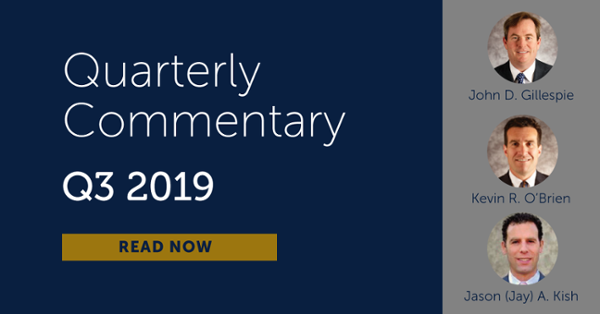